So matcha is cute and all but does it really do anything for you? Does it boost your immune system? What’s so great about it and why do people love it so much?

The history of matcha in Japan is nearly a millennium old. The seeds used to make it were first brought to the country – to the city of Kyoto – in 1191 A.D. by a Japanese Buddhist monk, Myōan Eisai who procured the seeds after traveling to China.

The word matcha comes from the combining of two Japanese words matsu (to wipe or rub) and cha (tea) which describes how matcha is made. Traditionally, the leaves are rubbed with stones and turned into a fine powder. Both matcha and regular green tea come from the same Camellia sinensis species, but they are grown and processed in different ways.

The difference between green tea and matcha is that with the latter, the leaves are fully de-stemmed and prior to harvest, they are grown in the shade for up to 20 days. That causes the plant to make more chlorophyll – which gives the powder its vivid green color. As a result, matcha tea has more antioxidants, caffeine, and L-theanine versus regular green tea. 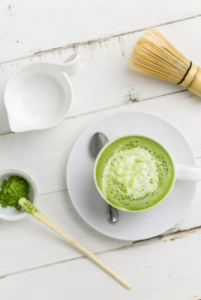 Matcha is a type of green tea made by taking young tea leaves and grinding them into a bright green powder. The powder is then whisked with hot water. This is different from regular green tea, where the leaves are infused in water, then removed.

Since matcha is made from high-quality tea, and the whole leaves are ingested, it’s a more potent source of nutrients than steeped green tea.

Matcha is rich in antioxidants called polyphenols, which have been tied to protection against heart disease and cancer, as well as better blood sugar regulation, blood pressure reduction and anti-aging. Another polyphenol in matcha called EGCG has been shown in research to boost metabolism, and slow or halt the growth of cancer cells.
Antioxidants help stabilize harmful free radicals, which are compounds that can damage cells and cause chronic disease.

Matcha can also protect the liver. The liver is vital to health and plays a central role in flushing out toxins, metabolizing drugs, and processing nutrients. Some studies have found that matcha may help protect the health of your liver.

One study gave diabetic rats matcha for 16 weeks and found it helped prevent damage to both kidneys and the liver. 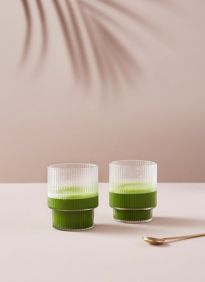 Since you are consuming whole leaves in matcha, you may get three times as much caffeine than a cup of steeped tea, about the amount in a cup of brewed coffee. Matcha lovers say that compared to the caffeine buzz from coffee, matcha creates an “alert calm” due to a natural substance that matcha contains called “L-theanine” which induces relaxation without drowsiness. That being said, even though matcha contains this to relax you, don’t take it after 6pm to ensure the caffeine doesn’t interfere with your sleep! 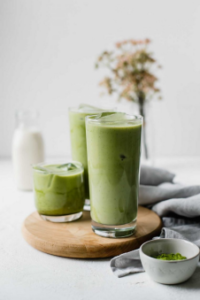 Even organically grown green teas have been shown to contain lead, which is absorbed by the plant from the environment, particularly tea grown in China. When traditional green tea is steeped, about 90% of the lead stays in the leaf, which is discarded. With matcha, since the whole leaf is consumed, you will ingest more lead. One independent group, ConsumerLab.com, which tested teas, estimates that a cup of matcha may contain as much as 30 times more lead than a cup of green tea. Therefore,
they recommend drinking no more than one cup daily, and not serving it to children. But that shouldn’t scare you off consuming matcha tea for its benefits, just choose organic matcha that is lab-tested for purity and produced by small growers.

Oxygen radical absorbance capacity (ORAC) is a method of measuring antioxidant capabilities. The ORAC value of matcha tea is one of the highest in the superfood realm, at about 1348 units per serving. You can think of your cells as having little engines, burning the fuel we put in to run all day. And just like car engines create toxic exhaust, our cells create toxic free radicals as part of their energy generating process. If you build up too much free radical exhaust, and you start to cause problems. Excess free radicals promote the development of chronic and degenerative ailments such as heart disease, cancer, arthritis, aging, autoimmune disorders and even neuro-cognitive decline. Antioxidants nullify free radicals. And because free radical production goes way up after we eat, having a diet full of antioxidants is the most direct and effective way to combat free radical accumulation. Women, who eat about 1800 calories per day, should get at least 8,000 ORAC units.

The disease-fighting punch of green tea is largely due to its high concentration of epigallocatechin gallate (EGCG), a substance with more antioxidant activity than vitamins C and E and other nutritional heavyweights. Quality matcha has up to 137 times the amount of EGCG compared to other green teas. This particular antioxidant has shown promising results in helping fight against HIV, cancer and many other disorders and diseases. A study demonstrated that EGCG had an anti-HIV-1 effect by preventing the binding of HIV-1 glycoprotein to T cells. EGCG holds promise for preventing and treating certain cancers, some studies have shown that fewer at-risk individuals got cancer when they took EGCG daily. It is also being studied for healthier oral hygiene due to its ability to suppress oral pathogens.

Have fun with matcha! 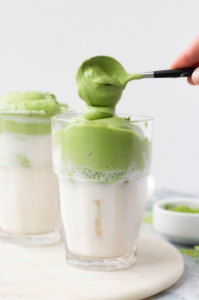 Meet your new favorite summertime energy-boosting beverage. This vegan Dalgona-style whipped matcha latte is a dairy-free and refined sugar-free spin on the Dalgona Whipped Coffee craze that is sweeping TikTok and Instagram. The concept came from the popular beverage in South Korea. Traditionally it is made from water, instant coffee and refined sugar. You whip those three ingredients together and serve over milk. 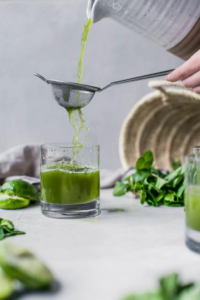 Matcha Frappe
A dairy-free matcha latte topped with easy homemade paleo vanilla ice cream. The perfect way to get in the mood for warm weather. It’s a green spin on a classic coffee frappe made with matcha!
We hope you guys enjoy these recipes!