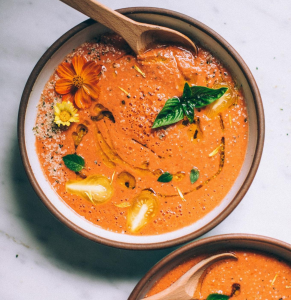 Whatever the ingredients, gazpacho is a healthy soup rich in minerals, antioxidants, fiber and in vitamins C, A and E. Red tomatoes, for example, are high in carotenoids such as lycopene and beta-carotene, antioxidants that can prevent prostate cancer, high blood pressure and eye problems.

So let’s learn how to make it!

Gazpacho is the quintessential summer soup because all of the fresh ingredients are deliciously in season this time of year, and there’s no need to heat up your stove or oven! Just prep your ingredients on a cutting board. Then your blender or food processor will take it from there. To make this homemade gazpacho recipe, you will need:

With such a simple pureed soup, toppings are a must! I like to add any combination of the following to gazpacho:

Or, of course, it’s probably most common to just sprinkle a few of the leftover chopped gazpacho veggies on top (such as tomato, green pepper, onion or cucumber). Whatever sounds good to you!